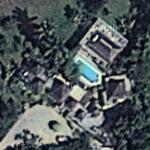 By jdubble07 @ 2014-03-12 05:11:52
@ 18.431217, -77.950724
Montego Bay, Jamaica (JM)
Oscar Hammerstein was an American librettist, theatrical producer, and (usually uncredited) theatre director of musicals for almost forty years. Hammerstein won eight Tony Awards and two Academy Awards for Best Original Song. Many of his songs are standard repertoire for singers and jazz musicians. He co-wrote 850 songs. Hammerstein was the lyricist and playwright in his partnerships; his collaborators wrote the music. Hammerstein collaborated with composers Jerome Kern, Vincent Youmans, Rudolf Friml, Richard A. Whiting and Sigmund Romberg; but his most famous collaboration, by far, was with Richard Rodgers, which included The Sound of Music.

Hammerstein owned this 7,000 sqft, 17 acre property where he wrote 'The Sound of Music' from the terrace. Guests who have rented the property include Meryl Streep and Tracy Ullman.
Links: en.wikipedia.org
544 views