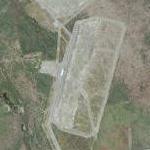 The US Air Force's over-the-horizon-backscatter (OTH-B) air defense radar system is by several criteria the largest radar system in the world. Six one-million-watt OTH radars see far beyond the range of conventional microwave radars by bouncing their 5-28-MHz waves off the ionosphere, an ionized layer about 200 km above the earth. It was developed over 25 years at a cost of $1.5 billion to warn against Soviet bomber attacks when the planes were still thousands of miles from US air space.