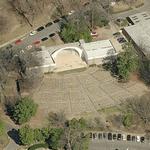 The Overton Park Shell has been the subject of a large-scale renovation funded by the Levitt Foundation. An active location for local performance art built in the 1930's, the Shell hosted many famed musicians. Despite its central location within Overton Park, the Shell fell into disrepair in the 1980's and 1990's after the site was largely abandoned. Now called the Levitt Shell, this musical venue is being renovated by Memphis firm Askew Nixon Ferguson Architects with state-of-the-art audio and visual design. The project is due to be completed in the fall of 2008, when free concerts will once again be held in the space.
Links: www.yahoo.com
774 views