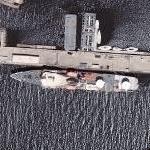 Navy ship, had a distinguished career as a training
vessel, was towed from the Beaumont, Texas, Re-
serve Fleet for hurricane recovery work in Lake
Charles, La., and is now being refitted to ship out
to sea again. This time, the ship will be known as
the Pacific Collector, and will support the Depart-
ment of Defense’s Missile Defense Agency.

The Pacific Collector will carry telemetry equipment
to support missile flight tests from remote areas
with little or no test infrastructure. Most of its work
will be done in the Pacific Ocean, and the ship will
be homeported in the San Francisco Bay area.

The ship was launched as the USNS Chauvenet in
1970, and was the Navy’s first ship specially de-
signed to support coastal hydrographic surveys.

In 1996, the Maritime Administration took title to
the ship, renamed it the Texas Clipper II and had it
refitted as a training ship, delivering it to the Texas
Maritime Academy in 1996.

The Texas Clipper II was retired in 2005 to the Na-
tional Defense Reserve Fleet in Beaumont months
before it was needed to house Hurricane Rita re-
covery workers and evacuees in Lake Charles.

The Texas Clipper II was relieved of its FEMA mis-
sion in early March, and arrived at the shipyard for
conversion work on March 18, 2006.
Links: s.yimg.com
2,506 views