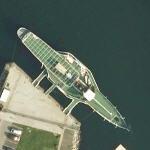 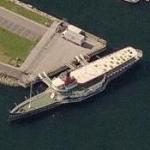 After twelve years as a ferry and excursion steamer in Bournemouth and the Solent area, at the outset of World War II, Princess Elizabeth was taken over by the Admiralty and converted into a minesweeper (No. J111). A year later, she was on her way to Dunkirk where her first task was to clear the mines from the narrow channel off the beaches, which was the only escape route. Only then could the work of embarking the waiting troops begin. Many of her sister ships, including the Brighton Belle, the Devonia and Gracie Fields were sunk at that time.

Among others, she brought back to Dover 500 Frenchmen that day. Before the end of the war, she served as an anti-aircraft vessel. Then, in 1946, she returned to her civilian occupation.

When she was superseded as an excursion boat by more modern vessels, like many old timers, she enjoyed brief fame as a film star, and appeared in the Walt Disney film The Castaways.

In 1970, she was moored just up-stream of London Bridge as a restaurant.

She is now owned by the City of Dunkerque.
Links: www.adls.org.uk
903 views