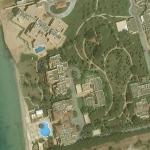 The princes is married to Prince Mishaal bin Saud bin Abdulaziz Al Saud, who was the governor of the Najran Province from April 1997 to November 2008 and is a member of House of Saud.
Links: en.wikipedia.org
1,779 views