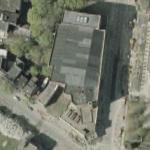 The Palace Theatre, a grand cultural and entertainment facility in the heart of Albany , New York , first opened its doors in October 1931. Built during the Depression, the Palace was the largest theatre in a city already noted for a number of other opulent movie houses. Today, the Palace Theatre remains the sole survivor of this period of entertainment and continues to make history with a widely diverse offering of popular acts and cultural events.

The Palace Theatre was designed by John Eberson, one of the foremost motion picture theatre architects in the world. Originally an RKO movie house presenting vaudeville acts between feature films, the Palace Theatre boasts an ornate Austrian Baroque design with "atmospheric" elements in the auditorium. Atmospheric design referred to architectural features that created the illusion of the auditorium being open to the sky above. In the Palace Theatre, this was achieved by installing a small ceiling cove painted with clouds floating over a blue sky. Though many changes have taken place since its opening, the Palace Theatre fortunately has retained most of its original design features. These include an impressive brass chandelier in the main lobby, original murals painted by Andrew Karoly and Jules Zartol, and plaster beams in the fore-lobby painted to resemble carved wood.

RKO was founded in 1928 when RCA created a film company that merged with Joseph Kennedy's film booking office, the Keith-Albee-Orpheum circuit of vaudeville houses, and the Photophone division of RCA. This was done in order to gain entry into a film market dominated by Warner Brothers and Paramount Famous-Lasky during the advent of the "talkies". RKO commenced a building campaign to add to it's 300 theatres, four film studios, and $80 million dollars of working capital. The Palace Theatre in Albany was one of the theatres commissioned during RKO's zenith.

The Palace is located on the northwest corner of Clinton Avenue and North Pearl Street on a parcel of land assembled from fifteen separate properties. Apparently some difficulty was encountered in putting together the land for two lots remained within the theatre property boundaries and the building was designed around two existing buildings which still stand. Construction started in June of 1930, barely two months after the land was actually acquired. The original working drawing indicate Fabian Securites, Inc., was the client and RKO the lessee. By October 1931, the theatre was completed.
Links: www.palacealbany.com
944 views