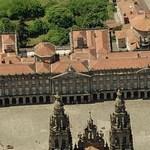 By DonMartini @ 2007-11-24 02:56:44
@ 42.880258, -8.546334
Santiago de Compostela, Spain (ES)
The Rajoy palace is a long and elegant four storey granite building that faces Santiago cathedral on the Obradioro square. The entire ground level has an arched walkway running along its length and although uniform in appearance has a central columned and capped feature plus two slightly less exuberant elements of detailing on either side. It was designed by Charles Lemaur, a Frenchman and is distinctly neo-classic in appearance. The large triangular central feature is of particular interest as it depicts the apostle, Saint James, when he was said to have appeared at the "battle of Clavijo" to demonstrate his support of the Spanish.

Today the Rajoy palace is the town hall and also the parliament building for Galicia’s regional government known as the Xunta, but it was built in the eighteenth century with religious uses in mind. It takes its name "Rajoy", from the Bishop who instigated its construction and originally had a variety of uses, most of which were ecclesiastical. First and probably foremost, it was a residence for numerous groupings of cathedral staff including choristers and the many priests who took confessions from the visiting pilgrims. It is believed that many of these priests were bilingual so as to understand the "declarations of guilt" of the numerous foreign pilgrims and this led to them becoming known "lenguajeros".
Links: www.galiciaguide.com
937 views