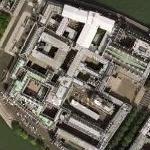 It is built on the location of the former royal palace of Saint Louis, from which the Sainte Chapelle still remains.

It also houses the Conciergerie, a former prison which is now a museum. The Conciergerie is notable in part because Marie Antoinette was imprisoned there before being executed on the guillotine.
Links: www.insecula.com
921 views