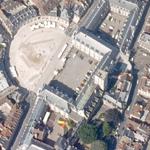 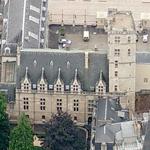 As time passed, buildings and offices were added in a chaotic manner, with a resulting problem of management and organization. The first steps in regaining control came with the construction of a general assembly hall, under the direction of the architect Jules Hardouin-Mansart. In the 18th century much renovation and construction laid in the responsibility of Jaques Gabriel.

The once kitchens, which provided a huge quantity of meals to the dukes, was demolished and the principle stones used to build the theater of Dijon.

As the power of the burgundy state rose, the palace became handsomely decorated and flamboyant.

Joined to the main buildings is the Museum of Art, and very close by the cathedral Notre Dame, the church Saint Michael, and the old "Corn Exchange".

Not all parts of the Palace can be visited, and during important manifestations the gates will actually be closed to the public. The visit is interesting with and English speaking guide, and if you do not mind steps, take a climb up the "Tour de Philippe le Bon". You'll have an impressive view of Dijon.
670 views