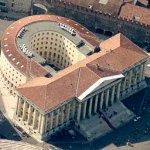 By Effi @ 2008-03-29 07:19:36
@ 45.437735, 10.993913
Verona, Italy (IT)
Palazzo Barbieri has, since 1874 been the seat of the council offces, but was originally the 'Gran Guardia Nova' built for military purposes by Giuseppe Barbieri, between 1835 and 1848 on the site of the demolished Misericordia hospital. This large building in Avesa tuff, from a hamlet to the north of the city, is neoclassical in style with a Corinthian colonnade and a central body with a pronaos, also Corinthian in style which rises above a grand staircase. However, the circular body to the back was added immediately following damage to the building during the last war. Inside the building hang two large pictures illustrating Verona's story. The first is by Paolo Farinati representing the 'Victory over Barbarossa at Vacaldo in 1164' and the second is by Felice Brusasorci illustrating the 'Victory of the Veronese over Benacensi in 1849.
1,220 views