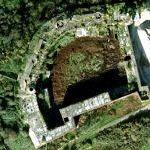 By kjfitz @ 2010-07-21 21:21:11
@ 51.463571, .455841
Cliffe, United Kingdom (GB)
Cliffe Fort is a Royal Commission fort built in the 1860s on the edge of the Cliffe marshes on the Hoo Peninsula in north Kent to protect against invasion via the Thames. It is opposite Coalhouse Fort in Essex: they are 2 km apart. Construction was difficult due to the marshy ground and the malaria-carrying mosquitos. It was armed with 12.5-inch 38-ton and 11-inch 25-ton rifled muzzle-loading guns. Protection of these guns was provided by granite-faced casemates with shields for added defence. The shields, casemates and the rails on which the gun carriages stood are all still visible today.

A Brennan Torpedo station was added in 1890. This was a wire-guided missile used for harbour defence: the launching rails are still visible at low water. It was replaced around 1910 with quick firing guns. The fort was armed in World War I and was used as an anti-aircraft battery in World War II. It is now inside a gravel extraction site and is inaccessible and very overgrown. It can however be viewed from the riverside path.
Links: en.wikipedia.org
756 views