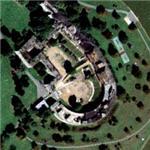 Coalhouse Point was the site of an artillery battery, although nothing survives of this building[1]. The fort was rebuilt in the 1860s following recommendations by the Royal Commission on the Defence of the United Kingdom as a coastal defence and was completed in 1874. The fort was built on low lying land in a curve of the river Thames at East Tilbury and was positioned there to form a "triangle of fire" between Coalhouse Fort on the Essex bank of the river and Cliffe Fort and Shornmead Fort on the Kent bank. It continued to serve as a defence to the capital through two world wars and was eventually bought by Thurrock Council in 1962.

During World War Two, rooms in Coalhouse Fort were equipped with instruments used to monitor the magnetic field of ships as they left the docks at Tilbury. This monitoring was to confirm the effectiveness of the individual vessel's degaussing equipment. Degaussing is a process whereby the naturally occurring magnetic field of a steel hulled ship could be neutralised by fitting electrical cables around the hull and passing an electric current through them. The neutralisation of the magnetic field was used as a countermeasure against magnetic mines, which as the name suggests, are triggered by the magnetic field of a ship's hull passing over them. The monitoring station was staffed by Wrens (Women's Royal Naval Service) working with civilian technicians. Cables were laid on the river bed and as ships passed over them, the magnetic field could be measured and (if necessary) adjustments made to the ship's equipment. The fort communicated with the ships by flags, Aldis lamp and in some cases by launch if the ship failed to stop. The Wrens and the technical staff were under strict orders not to discuss their work as degaussing was highly secret.
Links: www.coalhousefort-gallery.com, en.wikipedia.org
887 views