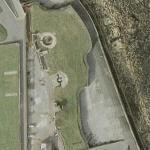 Heugh Battery was one of three erected in 1860 to protect the fast growing port of Hartlepool. Heugh and Lighthouse Battery were placed close by the lighthouse and armed with four and two 68pr smoothbore guns respectively. The third battery, Fairy Cove mounted three of the same weapons and was slightly further to the north at the end of the town moor.

The original battery was modified for three 64pr Rifled Muzzle Loading guns in the 1880's and then fell out of use with the introduction of breech loaders on hydropneumatic mounts in 1893. The lighthouse battery was reconstructed for one of these guns, a 6-inch Mk VI and a further two were placed in Cemetery Battery north of the town.
Links: www.teesarchaeology.com, en.wikipedia.org
736 views