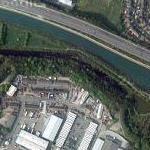 The island is separated from the mainland by a stretch of water similar to a moat. The first means of crossing this stretch of water was by stepping stones, followed by a single track built to allow the passage of pedestrians and horse drawn carts to have access to Portsea Island. A continuous bastioned trace was built between 1858 and 1864 with special fortified bridges for road and rail access. A model of the Hilsea Lines featured in the 1862 International Exhibition. Even before their completion the Hilsea Lines had been rendered obsolete by the1859 Royal Commission and advances in artillery technology. The development of rifled artillery meant that it was now possible for an enemy to occupy the high ridge of Portsdown Hill north of Portsmouth and shell the naval base from several miles away without having to attack the Hilsea Lines. To counter the new threat a series of "Palmerston Forts" were constructed on Portsdown Hill and the Hilsea Lines were abandoned.
Links: en.wikipedia.org
537 views