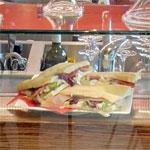 By jbottero @ 2013-04-14 21:58:25
@ 45.461846, 9.190096
Milan, Italy (IT)
In Italy, panino is the word for a sandwich made from bread other than sliced bread, in which case Italians call it a tramezzino. Examples of bread types used are ciabatta, rosetta and baguette. The bread is cut horizontally and filled with deli ingredients such as salami, ham, cheese, mortadella, or other food, and sometimes served warm after having been pressed by a warming grill. A toasted sandwich made from sliced bread is not called "panino" but "toast" by Italians, and is usually filled with ham and a few slices of cheese, and heated in sandwich press. A popular version of panino in Central Italy is filled with porchetta, slices of pork roasted with garlic, salt, rosemary, and sage.
Links: en.wikipedia.org
488 views