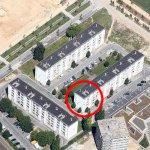 Mayor Adeline Hazan told BFM TV that the explosion at the four-storey building was probably caused by a gas leak.

Emergency services say at least 10 people have been injured, including a number of children.
Links: www.bbc.co.uk
492 views