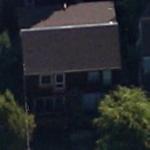 The granddaughter of publishing magnate William Randolph Hearst, she gained notoriety in 1974 when she joined the Symbionese Liberation Army after they had kidnapped her. Apprehended after having taken part in a bank heist with other SLA members, Hearst was imprisoned for almost two years before her sentence was commuted by President Jimmy Carter. She was later granted a presidential pardon by President Bill Clinton in his last official act before leaving office.
Links: en.wikipedia.org
745 views