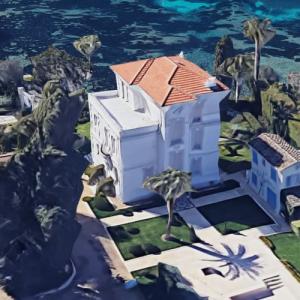 By jdubble07 @ 2020-06-05 09:51:42
@ 43.686845, 7.3375657
St Jean Cap Ferrat, France (FR)
Rinat Akhmetov is a Ukrainian billionaire businessman, and oligarch. Through an accidentally unredacted court filing, it was revealed that Donald Trump's campaign chairman, Paul Manafort, had met with Konstantin Kilimnik and asked him to pass private polling data onto Rinat Akhmentov.
Akhmentov reportedly purchased this home from Pavel Fuks for $220M.

Pavel Fuks is a Ukrainian businessman, investor, philanthropist and founder of the development company Mos City Group. In June 2008, he negotiated with Donald Trump about the construction of Trump Tower in Moscow. The deal reportedly fell through when Trump demanded $20M to put his name on the building, while Fuks would only offer $10M.