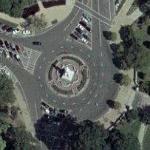 The white marble Peace Monument was erected in 1877-1878 to commemorate the naval deaths at sea during the Civil War. The 44-foot-high monument stands in the circle to the west of the Capitol at Pennsylvania Avenue and First Street, N.W.

At the top of the monument, facing west, stand two classically robed female figures. Grief holds her covered face against the shoulder of History and weeps in mourning. History holds a stylus and a tablet that was inscribed "They died that their country might live." Below Grief and History, another life-size classical female figure represents Victory, holding high a laurel wreath and carrying an oak branch, signifying strength. Below her are the infant Mars, the god of war, and the infant Neptune, god of the sea. The shaft of the monument is decorated with wreaths, ribbons, and scallop shells.

Facing the Capitol is Peace, a classical figure draped from the waist down and holding an olive sprig. Below her are symbols of peace and industry. A dove, now missing and not documented in any known photographs, once nested upon a sheaf of wheat in a grouping of a cornucopia, turned earth, and a sickle resting across a sword. Opposite, the symbols of science, literature, and art (including an angle, a gear, a book, and a pair of dividers) signify the progress of civilization that peace makes possible.

At the corners of the monument, four marble globes are visually supported by massive brackets. The fountain below, with a jet on each side, empties into a quatrefoil-shaped basin.

Inscribed "In memory of the officers, seamen and marines of the United States Navy who fell in defense of the Union and liberty of their country, 1861-1865," this sculptural group has also been called the Naval Monument.

The sculptor of the monument was Franklin Simmons (1839-1913), who was born in Maine, where he became known for his portrait busts. He worked in Rome after 1867, when he received the commission for a statue of Roger Williams for the National Statuary Hall collection. In all, he created four statues and three busts for the United States Capitol. The Peace Monument is an example of his idealized neoclassical sculpture.
Links: www.aoc.gov
946 views