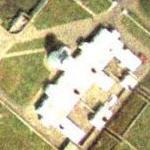 By kjfitz @ 2006-12-19 21:54:36
@ 50.164917, -5.671311
Pendeen, United Kingdom (GB)
Within the tower itself are two rooms, one over the other, and above them the lantern which originally contained a five-wick Argand lamp, to which oil was pumped from the room below. This lamp was replaced by an electric one in 1926 and the oil lamp is now on display at the Trinity House National Lighthouse Centre in Penzance. Around the lamp revolves an apparatus containing the lenses. This optic is very heavy, weighing 2½ tons, but as it floats in a trough containing ¾of a ton of mercury it can be set in motion by the merest touch.

Pendeen Lighthouse was automated in 1995 with the keepers leaving the station on 3rd May. The original optic has been retained but a new lamp plinth with two position lamp changer has been installed along with an emergency light and a new fog signal with fog detector. The lighthouse is now monitored and controlled via a telemetry link from the Trinity House Operational Control Centre at Harwich.
Links: www.trinityhouse.co.uk
502 views