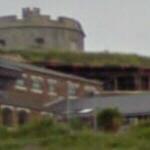 By daggerwell @ 2011-09-06 07:34:56
@ 50.14474, -5.044
Falmouth, United Kingdom (GB)
Pendennis Castle is a Henrician castle, also known as one of Henry VIII's Device Forts, in the English county of Cornwall. It was built in 1539 for King Henry VIII to guard the entrance to the River Fal on its west bank, near Falmouth. St Mawes Castle is its opposite number on the east bank and they were built to defend Carrick Roads from the French and Spanish threats of future attack. The castle comprises a simple round tower and gate enclosed by a lower curtain wall. It is now in the care of English Heritage.
Links: en.wikipedia.org
532 views