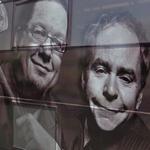 By adrbr @ 2011-04-27 17:11:59
@ 36.11219, -115.172841
Las Vegas, Nevada (NV), US
Penn & Teller (Penn Jillette and Teller) are Las Vegas headliners whose act is an amalgam of illusion and comedy. Penn Jillette is a raconteur; Teller generally uses mime while performing, although his voice can occasionally be heard throughout their performance. They specialize in gory tricks, exposing frauds, and performing clever pranks, and have become associated with Las Vegas, atheism, scientific skepticism, and libertarianism.
Links: en.wikipedia.org
716 views