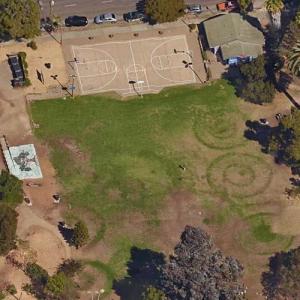 By alfjon @ 2006-08-05 13:45:20
@ 37.86574493, -122.25712357
Berkeley, California (CA), US
People's Park in Berkeley, California, USA is a park off Telegraph Avenue, bound by Haste and Bowditch Streets and Dwight Way, near the University of California, Berkeley. The park was created during the late 1960s as part of the city's radical activism, and it is today a popular hangout among locals with a community garden, a performance stage, a basketball court and a "Free Box" of donated items. It is also the serving spot of East Bay Food Not Bombs and serves as a sanctuary for many of Berkeley's homeless.

The mythology surrounding the park is a major part of local culture. The surrounding South Campus neighborhood was the scene of a major confrontation between student protestors and law enforcement during May, 1969. A mural near the park, painted by Berkeley artist and lawyer Osha Neuman, depicts the shooting of James Rector, a student who died from shotgun wounds inflicted by law enforcement on May 15, 1969.
Links: en.wikipedia.org
856 views