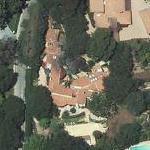 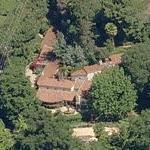 In the late 1930s and the first half of 1940s, it was occupied by Boris Karloff. The story says that it was Karloff who planted the estate’s rose garden, which stands to this day.

Then it passed to a producer, who rented it to the Scottish singer Donovan and to Elliott Gould, at different times.

Then Peri Gilpin bought it and subsequently sold it to Shana Goldberg-Meehan and Scott Silveri, the screenwriting couple who wrote and produced Friends.

Goldberg-Meehan and Silveri sold the house to John Goldwyn, who is an occasional producer, and his hotelier husband, Jeffrey Klein, who own the house today.