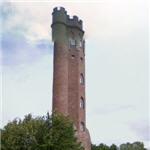 The tower is one of Birmingham's oldest surviving architectural features. Built in the open Rotton Park by John Perrott, who lived in Belbroughton, the tower now stands high above the local residential and business housing.

There are many stories to explain why the tower was built. One is that John Perrott wanted to be able to survey his land and perhaps entertain guests. Or the tower might have been used to spot animals for hunting. Or that he built the tower so that he could see his wife's grave, 15 miles away.

From 1884 to 1979 the tower was used as a weather recording station for the Birmingham and Midland Institute. In 1966 the Geography Department of the University of Birmingham took over the running of the observatory until operations were transferred to the main campus.

It has been suggested, but not proven, that the towers of Perrott's Folly and Edgbaston Waterworks may have influenced references to towers in the writings of J. R. R. Tolkien, who lived nearby as a child.
Links: en.wikipedia.org
551 views