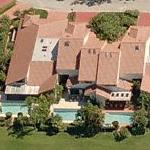 Orthwein is also the great-great grandson of of Adolphus Busch, founder of the Anheuser-Busch Brewing Company.
Links: www.forbes.com
1,545 views