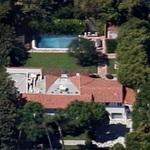 The couple purchased this historic house in November 2013 for $7.3M. The house was sold by the estate of music executive Polly Anthony, but is probably best-known as the former home of legendary Oscar-winning screenwriter Herman Mankiewicz.
Links: www.imdb.com
4,460 views