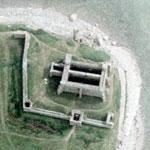 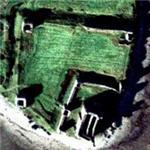 By kjfitz @ 2007-02-18 16:03:23
@ 54.06259, -3.172919
Barrow-in-Furness, United Kingdom (GB)
Piel Castle stands on the South-Eastern point of Piel Island at the mouth of the deep-water harbour of Barrow-in-Furness, guarding the passage to and from Furness Abbey's holdings in Ireland and the Isle of Man. The Abbot and convent were granted a licence to crenellate their dwelling-house in 1372 by Edward III, which suggests the fortification of an existing building.

By 1537, when Furness Abbey was disolved, the castle was in a ruinous state. The Island was given to Barrow Corporation in 1918, and the Castle came into state guardianship in 1919.

Piel Castle stands on a low mound of clay at the highest point of the Island. It consists of a keep, with inner and outer baileys, each surrounded by a ditch, and with towers at three corners.
Links: www.visitcumbria.com
467 views