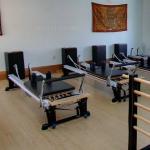 The most widely used piece of apparatus, and probably the most important, is the Reformer, but other apparatus used in a traditional Pilates studio include the Cadillac (also called the Trapeze Table), the high (or electric) chair, the Wunda Chair, the baby Chair, and the Ladder Barrel, the Spine Corrector (Step Barrel) and small barrel. Lesser used apparati include the Magic Circle, Guillotine Tower, the Pedi-Pole, and the Foot Corrector.
Links: en.wikipedia.org
534 views