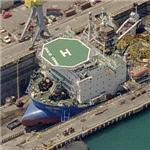 Built for and operated by ITM Offshore Ltd., Middlesborough as a cable layer/flexible pipelayer and named ITM Venturer. In 1987 the vessel was sold to Stena Offshore A/B, Sweden and renamed Northern Venturer. Sold again in 1988 to Davy Normanby Ltd., Middlesborough who continued its use in the North Sea oilfields. Sold again in 1988 to Italcable s.p.A., Sorrento and again renamed, this time to Giulio Verne, and is now used for cable work in the Mediterranean from its base near Naples.

Suffered serious fire damage in August 1999 while loading cable at the Pirelli factory near Naples. Repaired and still operated by Pirelli for cable laying. Gross tonnage has increased to 10,617.
Links: atlantic-cable.com
1,827 views