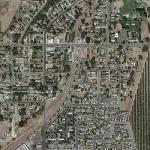 Piru has been used for shooting countless film and television productions over the years, including Desert Fury (1947) starring Lizabeth Scott, John Hodiak and Burt Lancaster, with Mary Astor and Wendell Corey. Location scenes were shot with the northwest side of Center Street, at Main, used as the exterior of Fritzi Haller's saloon and casino; the Piru Mansion was used as the Haller home and the historic Piru bridge, crossing Piru Creek on the east side of town, was used as the locale of the car crash. (Some of the exterior shows were also filmed in the Old Town section of Cottonwood, Arizona, especially where Burt Lancaster enters the Old Town jail, extant though enlarged.) Piru was also used in the scene in A Star Is Born (1954) starring Judy Garland and James Mason where Jack Carson's character, Libby, finds them after they are married.

Piru stood in for Clarksburg, California, in the 1974 TV movie, The California Kid. It was used for exterior shots in the 1975 Filmation children's series The Ghost Busters. Scenes in The Dukes of Hazzard were sometimes filmed on location in Piru, as were scenes in Murder, She Wrote.

In Twilight Zone: The Movie (1983), the scenes of the rest home in the "Kick the Can" segment were filmed at the historic building that is now the Heritage Valley Inn. Dolly Parton and Sylvester Stallone filmed scenes for their movie, Rhinestone (1984), in Piru. With the exception of a few scenes, the entire comedy Happy, Texas (1999) was filmed in Piru. Scenes of Bubble Boy The exterior of Piru United Methodist Church was used in Big Momma's House(2001), the chase scene in Enough (2002) starring Jennifer Lopez, scenes from Torque (2004) and the final scene for Van Helsing (2004) were shot in Piru.

The 2005 movie The Amateurs starring Jeff Bridges was largely filmed in Piru — as was much of the television movie The Love War (1970) starring Jeff's father Lloyd Bridges, with Angie Dickinson (with Piru serving as location and setting). The town has also served for some of the scenes on TV's Reno 911! and for scenes set in the fictional town of Bon Temps, Louisiana, in True Blood.

In the Disney movie Race to Witch Mountain (2009) starring Dwayne Johnson, "The Rock," scenes where he and the alien boy and girl go into a small town, Stony Creek, where they have repairs done on his taxi and go to a restaurant/country music club, were actually shot in Piru, which continues to be a popular location with film companies.

Most recently, Piru Mansion was used as the home of Ellis Wyatt in the movie version of Atlas Shrugged by Ayn Rand.