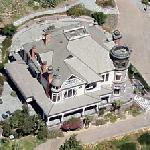 The Piru Mansion has been shown in numerous films, as well as television and commercials. Some of the films the mansion has been used in are: Murder She Wrote, Charlie's Angels, The Incredible Hulk, Payne, Ping!, American Wedding, and many others.

Most recently, Piru Mansion was used as the home of Ellis Wyatt in the movie version of Atlas Shrugged by Ayn Rand.