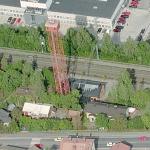 Pispala shot tower was built in 1908 by Oy Hjorth Ab and it is 55 metres high, It was in use until 1972. It's the only surviving shot tower in Finland.
Links: fredfryinternational.blogspot.com
3,076 views