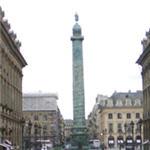 By kjfitz @ 2008-07-02 23:16:34
@ 48.866155, 2.328112
Paris, France (FR)
Napoleon erected the present column, modelled after Trajan's Column, to celebrate the victory of Austerlitz; its spiralling veneers of bas-relief bronze plates (by the sculptor Pierre-Nolasque Bergeret) were made out of cannon taken from the combined armies of Europe, according to his propaganda. (The usual figure given is hugely exaggerated: 133 cannon were actually captured at Austerlitz.)
Links: en.wikipedia.org, virtualglobetrotting.com
621 views