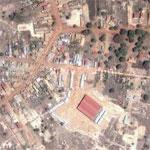 By jbottero @ 2008-04-16 21:25:40
@ 14.231897, 104.080546
Anlong Veng, Cambodia (KH)
On the night of April 15, 1998 the Voice of America, of which Pol Pot was a devoted listener, announced that the Khmer Rouge had agreed to turn him over to an international tribunal. According to his wife, he died in his bed later in the night while waiting to be moved to another location. Ta Mok claimed that his death was due to heart failure. Despite government requests to inspect the body, it was cremated a few days later at Anlong Veng in the Khmer Rouge zone, raising suspicions that he committed suicide.