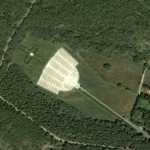 By giove @ 2009-10-08 07:44:48
@ 41.49409, 13.806993
Cassino, Italy (IT)
The Polish cemetery at Monte Cassino contains graves of more than one thousand Poles who died while storming the abbey in May 1944, during the Battle of Monte Cassino. The religious affiliation of the dead men is marked by each grave having one of three different types of headstone: the Catholic and Orthodox headstones are distinguished from each other by different forms of cross, while the Jewish headstones bear Stars of David. The cemetery also contains the grave of General Anders, commander of the Polish forces, who survived the war, dying in London in 1970.
538 views