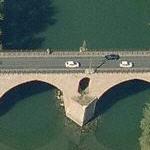 By Parabellum @ 2009-02-04 10:56:04
@ 44.017032, 1.349954
Montauban, France (FR)
King Philip the Fair of France officially launched the building of the bridge in 1303 while on a tour to Toulouse. The project took 30 years to complete, and the bridge was inaugurated in 1335. The main architects were Étienne de Ferrières and Mathieu de Verdun. It is a pink brick structure over 205 meters (224 yards) in length, but while its fortified towers have disappeared, it is otherwise in good preservation. The bridge was designed to resist the violent floods of the Tarn River, and indeed it withstood successfully the two terrible millennial floods of 1441 and 1930. The bridge is a straight level bridge, which is quite unusual for Medieval Europe, where lack of technological skills meant that most bridges were humpback bridges.
Links: en.wikipedia.org
466 views