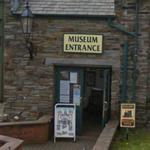 By adrbr @ 2011-11-28 13:19:52
@ 54.085306, -4.757701
Port Erin, United Kingdom (GB)
The Port Erin Railway Museum in the village of Port Erin in the Isle of Man is a small display that shows the history of the Isle of Man Railway through exhibits and visual displays which chart the history of the railway from its opening in 1873 until the present day, covering the now-closed lines that served Peel, Ramsey and Foxdale as well as the remaining line to Port Erin to which it forms part of the southern terminus.
Links: en.wikipedia.org
292 views