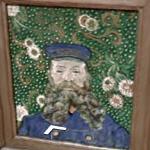 By kjfitz @ 2011-06-09 21:48:34
@ 40.761663, -73.977475
New York, New York (NY), US
This portrait of Joseph Roulin is one of six that van Gogh painted of his close friend, a postal employee in the southern French town of Arles. In 1888, van Gogh moved to Arles, a fifteen-hour train ride from Paris, in the hopes of creating an artist cooperative. The plan never came to fruition, and the artist found himself lonely and isolated. He found comfort and companionship with the Roulin family, and they became the subjects of many of his paintings.

In this portrait, believed to be painted from memory, Roulin is depicted in the postal uniform he always wore proudly, set against an imaginative backdrop of swirling flowers. In a letter to his brother Theo, the artist wrote that of all subjects, "the modern portrait" excited him the most. He elaborated, "I want to paint men and women with that something of the eternal which the halo used to symbolize, and which we try to convey by the actual radiance and vibration of our coloring."
Links: www.moma.org
577 views