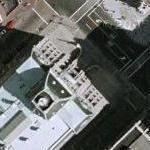 The architectural design of City Hall was crafted by Samuel J. F. Thayer, (Aug. 20, 1842- Mar. 1, 1893) a native of Boston. Providence City Hall was one of his first successes which led to other public commissions: the town halls in Brookline and Stoughton, Massachusetts, as well as the Nevins Memorial in Methuen, Massachusetts.

His plan was chosen from four finalists out of a total of 21 entries, each given a name such as "Fait," "Maltese Cross," and "Blue Wafer" to avoid any favoritism through identification with the architect.

Thayer's "Blue Wafer" plan was selected, and he was awarded $1,000. He described his design as "renaissance, of the character widely adopted for civic buildings in the most advanced cities of the world."

His plan proposed a tall, cathedral-like tower (see rendering in Archives) and floor dimensions deemed too large and costly by the committee. Consequently, the plan was modified, and the tower replaced with a modest mansard roof to meet the budget. The revised cost estimated by Thayer was just under the $635,000 that the Council was prepared to spend. Eventually, the cost of City Hall exceeded even this budget, totaling over one million dollars.

The building's construction is of iron and brick, faced with Westerly granite on the Dorrance and Washington Street sides and New Hampshire granite on the other two sides.The sidewalks are granite blocks, 5 to 6 feet wide and 18 to 20 feet long. The entire structure was built on an artificial foundation set atop 3,128 pilings driven deep into the underlying hardpan.

The cornerstone was set in place on June 24, 1875. After three years in construction, the city's first municipal government building became operational on November 14, 1878.

City Hall then became the geographic and governmental center of the city, and its workers moved into what was the finest post-Civil War civic building in the state.When City Hall opened, it comprised a subbasement, basement (today's ground floor), and four upper floors. Gas light fixtures, some of which remain in place today, lighted all the rooms.
Links: www.providenceri.com
1,510 views