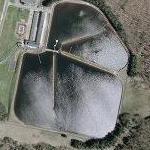 The main Scituate reservoir was formed by the construction of a dam across the Pawtuxet River at the former village of Kent. The dam, principally of earth, is about 3,200 feet long and 100 feet high. Water storage in the reservoir began on November 10, 1925. An aqueduct from the dam feeds the nearby treatment plant which was placed in operation on September 30, 1926.

The original treatment plant was state-of-the-art at the time of its construction. The plant was considered to be among the most technologically advanced of its day, and for many years the filtration system was the only plant of its type in New England. As demand continued to grow, the treatment plant underwent major expansions and renovations in the 1940's and again in the '60s. Today, the plant has a maximum treatment capacity of 144 million gallons of water per day and still remains the largest treatment facility in New England.

Once leaving the plant, water is delivered into the system through two major aqueducts. The first, the original 90-inch aqueduct constructed at the same time as the original treatment plant, is 4.5 miles long, including 3.3 miles of tunnel. It terminates at the structure called the siphon chamber, located near Phoenix Avenue in Cranston. From there, it splits into two large conduits, 60-inch and 66-inch in diameter, which in turn split into a series of progressively smaller transmission mains supplying the distribution system. The second supplemental aqueduct, constructed in the 1970s, is a 9.5 mile, 78-inch and 102-inch tunnel and aqueduct system which terminates at Budlong Road in Cranston.
Links: www.provwater.com
903 views