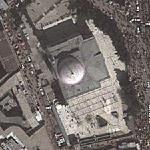 By Mike1989 @ 2013-04-05 04:24:59
@ 34.515468, 69.180678
Kabul, Afghanistan (AF)
Pul-e Khishti Mosque is the largest mosque in Kabul, Afghanistan. Located in the center of old Kabul, the Pul-e Khishti Mosque can be identified by its large blue dome. The mosque originally was erected in the late 18th Century, but largely rebuilt under Zahir Shah in the late 1960s. It was damaged during recent fighting in the area, but is one of the few buildings in the area which has had restoration work done on it.

Many Kabulis assert that the imam of this mosque for many years in the early part of the 20th century was an Englishman who had converted to Islam, and that the imam returned to England after relinquishing his position at the mosque.
Links: en.wikipedia.org
615 views