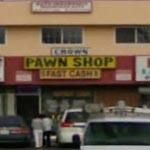 This pawn shop in Canoga Park was featured in the scene where Butch (Willis), ducks into the shop while trying to escape from Marsellus Wallace (Ving Rhames.) Unbeknownst to Butch and Marsellus Wallace the pawn shop owner has nasty surprise for them in his basement.

(Note: The interior was briefly used in the film and there is no basement. That scene was likely filmed inside a studio.)
Links: www.imdb.com
1,936 views