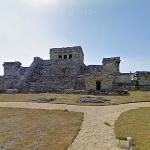 By kuressaare @ 2012-08-17 23:05:35
@ 20.214619, -87.429219
Tulum, Mexico (MX)
The most prominent of all the buildings at Tulum is El Castillo (the Castle), a pyramid-shaped temple which stands near the edge of the 40 foot cliffs that overlook the Caribbean. The building also served as a lighthouse for sailors. Two lanterns were positioned at the top of the pyramid such that when boats were coming in, they could line up the 2 lights to guide them into port.

Tulum stands on a bluff facing east towards the Caribbean Sea and because of this, is also known as Zama (The City of the Dawn). Tulm was a walled city, the walls surrounding the site served as defense against invasions. Access to both land and sea trade routes, made Tulm an important trade hub, especially for the obsidian trade.
Links: www.flickr.com
576 views