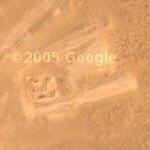 The core of the pyramid was made of small stones. Only piles of mud and limestone chips remain and it would seem that the builders never got around to set the casing for this monument. Its internal structure is an extremely simplified version of the standard Old Kingdom royal pyramids: it has a descending passage and a burial chamber. A huge granite block in the west of the burial chamber held the sarcophagus. The burial chamber was inscribed with Pyramid Texts.
Links: www.ancient-egypt.org
819 views