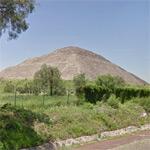 The Pyramid's construction between 200 and 450 A.D. completed the bilateral symmetry of the temple complex. A slope in front of the staircase gives access to the Avenue of the Dead, a platform atop the pyramid was used to conduct ceremonies in honor of Chalchiuhtlicue, the goddess of water and of the moon. This platform and the sculpture found at the pyramid's bottom are thus dedicated to Chalchiuhtlicue.
Links: en.wikipedia.org
2,162 views