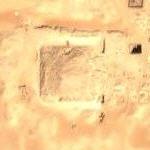 By kjfitz @ 2005-09-28 12:44:45
@ 29.868345, 31.214916
Saqqara, Egypt (EG)
The Pyramid of Unas at Saqqara, even though the smallest of the Old Kingdom Royal pyramids, is considerably more famous and better known then the king who built it. This is because, for the first time that we know of, the 128 magical spells of the Pyramid Text appear on the walls of its subterranean chambers. It was once called "Beautiful are the (cult) Places of Unas", but today it is little more then a pile of rubble that, sitting next to the famous Step Pyramid, seems hardly noticeable.
Links: www.touregypt.net
779 views