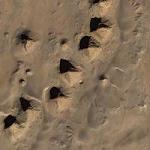 The pyramid field of Nuri contained 21 kings together with 52 queens and princesess . The first to build his tomb at Nuri was king Taharqa. His pyramid had 51.75 m square and 40 or 50 m high. Taharqa subterranean chambers are the most elaborate of any Kushite tomb. The entrance was by an eastern stairway trench , north of the pyramid's central axis, reflecting the alignment of the original smaller pyramid. Three steps led to a doorway, with a moulded frame, that opened to a tunnel, widened and heightened into an antechamber with a barrel-vaulted ceiling. Six massive pillars carved from the natural rock divide the burial chamber into two side aisles and a central nave, each with a barrel-vaulted ceiling. The entire chamber was surrounded by a moat-like corridor entered steps leading down from in front of the antechamber doorway. After Taharqa 21 kings and 53 queens and princesess were buried at Nuri under pyramids of good masonry, using blocks of local red sandstone. The Nuri pyramids were generally much larger than those at el-Kurru, reaching heights of 20 to 30 m. The last king to be buried at Nuri died in about 308 BC.
Links: www.narmer.pl
1,417 views