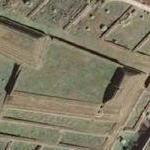 By kjfitz @ 2009-09-11 11:28:09
@ 28.322176, -16.412708
Güímar, Spain (ES)
The Pyramids of Guimar refer to six rectangular pyramid-shaped, terraced structures, built from lava stone without the use of mortar. They are located in the district of Chacona, part of the town of Güímar on the island of Tenerife in the Canary Islands. The structures have been dated to the 19th century and their original function explained as a byproduct of contemporary agricultural techniques. However, they have attracted attention largely due to more outlandish speculations regarding their origins and purposes.

Local traditions as well as surviving images indicate that similar structures (also known as, “Morras”, “Majanos”, “Molleros” or “Paredones”) could once have been found in many locations on the island. However, over time they have been dismantled and used as a cheap building material. In Güímar itself there were nine pyramids, only the six of which survive.
Links: en.wikipedia.org
473 views